From “Bugs Bunny change-ups” to “going full gorilla,” David Aretha instills excitement, humor, and inspiration into The Mad Dash. Jacob’s Little League team, Morey’s Funeral Home, is a perennial loser. But this ragtag squad of 10-year-olds has a new coach and a “ya gotta believe” attitude for opening day. Standing in the way of a championship is the best team in the league, the “invincible” Bankees. To beat their nemesis, Jacob’s team will need help from everybody, including the emotionally troubled Rupa, the club’s worst player. Can the underdog Morey’s Funeral Home team storm to victory? 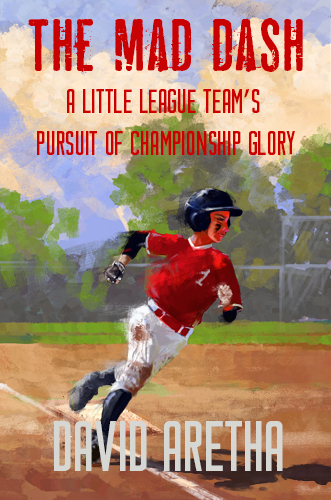 David Aretha, a two-time Moonbeam Children’s Book Award winner, has written and edited dozens of baseball books and documentaries, including movies screened at the Baseball Hall of Fame Film Festival in Cooperstown. He also has written player bios for thousands of Topps baseball cards.